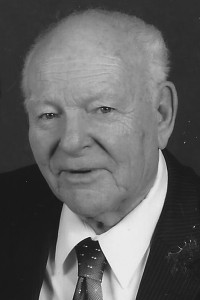 VICTOR ROBERT STOCKDALE born November 22, 1920, at Munson, Alberta passed away in Cardston on Wednesday, April 22, 2015 at age 94. Victor was predeceased by his father Robert Stockdale, mother Mary Ethel Agar, sister Dorothy Blanche, brothers Donald Verton and Melvin Grant Bond and by his third wife Beth Marion Gaunt (Hawthorne). He is survived by his sisters Ruth Winona Edgar (Stuart) and Ethel Roberta Robbie Mansfield (Joe), former wife Grace Halliday Rome, former wife Lois Jean Lovse (Martin), his children: Ronald Victor Stockdale (Veryl), Leslie Carol Clarke (Richard), Barry James Stockdale (Lorraine-deceased), Wendy Jolane Purnell (James), Thomas Conrad Stockdale (Deborah), Richard Glenn Stockdale (Linda), Kevin Halliday Stockdale (Val) and by his loving grandchildren, including greats and great-greats. Victor was a veteran of WW2, he was a man of great faith and generosity. He enjoyed serving others whether driving trolley, city bus, working as a projectionist or giving rides in his amphibious car. He had a never ending sense of humor and was very kind, loving and gentle. He was much loved by family and friends, and will be greatly missed. Friends may meet the family at the LEGACY FUNERAL HOME (107-6 St W Cardston) on Sunday, April 26th, from 7:00 to 8:00 p.m. or at the Church from 9:00 to 9:45 a.m. prior to the service. The Funeral Service will be held at The Church of Jesus Christ of Latter-day Saints, TEMPLE STREET CHAPEL, (355-3 St. W) Cardston, Alberta on Monday, April 27th, 2015 at 10:00 a.m. Interment in the Glenwood Memorial Gardens, Sherwood Park, Alberta on Tuesday, April 28th at 11:30 a.m. Donations accepted in his memoriam to the General Missionary Fund of the LDS Church.