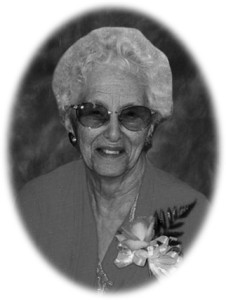 JULIET WEILER, beloved wife of the late Fred Weiler, of Lethbridge, passed away peacefully at St. Therese Villa on Tuesday, May 5, 2015 at the age of 99 years.

Juliet was born February 3, 1916 in Medicine Hat, Alberta, the eldest daughter of Antonio and Virginia Zanin. After completing high school in Medicine Hat and teacher training at the Calgary Normal School, she taught at southern Alberta one-room schools near Bow Island and Milk River. Juliet married Fred Weiler in 1940, and the following year they moved to L’Ancienne Lorette, now a suburb of Quebec City, to support the war effort. After the war, they returned to teaching in southern Alberta, living in Warner, Cardston and Taber before settling in Lethbridge. During this time, Juliet was devoted to raising their 6 children. She enjoyed working as a substitute teacher and teaching grade one and volunteered a great deal of her time to the Girl Guides and the Catholic Women’s League. She was always willing to serve when asked, such as when she took on the role of camp mother at Camp Columbus in Waterton, despite her fear of bears. In 1967, the family moved to Camrose, where for five years Juliet taught special needs children. This is the work that brought her the greatest satisfaction – her great patience and ability to listen made her well loved, and ex-students continued to correspond with her for many years after she retired. Her volunteer work with the Girl Guides and CWL continued in Camrose and she became president of the Bethany Ladies Auxiliary, supporting local nursing home residents through fundraising and volunteer activities. Juliet cherished her many friends and was an avid bridge player and square dancer. She loved having music in the family, making sure each of her children learned an instrument. She enjoyed singing with the Sweet Adelines, and playing clarinet in the Camrose Community Band. She always made her children’s friends feel welcome in her home, even to the extent of tolerating regular rock band practice. Juliet was passionate about gardening and also enjoyed attracting birds to her yard. In their later years, Juliet and Fred moved back to Lethbridge to be close to family there, including several grandchildren and great-grandchildren, whose company she cherished. For the last seven years of her life, Juliet was a resident of St. Therese Villa, where the staff and residents enjoyed her teasing and her positive attitude. Mom was a very honest and caring person, a wonderful big sister, devoted wife for 65 years, mother, grandmother and a friend to all who knew her.

A Prayer Service will be held at CORNERSTONE FUNERAL HOME, 2800 Mayor Magrath Drive South, Lethbridge, AB on Monday, May 11, 2015 at 7:00 P.M. with Deacon Cliff Bogdan, Officiant.

In lieu of flowers, donations may be made in Juliet’s name to St. Therese Villa, 253 Southgate Boulevard South, Lethbridge, AB, T1K 2S1.