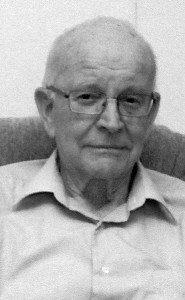 DR. MARK REED STRINGAM, beloved husband of Enes, passed away in the Taber Hospital on May 28, 2015 at the age of 90 years.

He is the loving father of: Christine, Jerry, George, Diane, Blair, and Anita. He is survived by his sons and daughters in law, 31 grandchildren and an increasing throng of great grandchildren.

He was predeceased by his wife, Enes, who passed away in April, 2002.

Dad was born and raised on the family farm in Glenwood, Alberta where he learned the rudiments of handling livestock. He moved with his parents to Lethbridge in 1937 where he completed high school. His summers were spent on the family ranch in Milk River. His passion for livestock took him to Ontario where he studied Veterinary Medicine. A brief service in the navy interrupted his studies but he was still able to graduate with a DVM in 1948. That same year he married Mom and they settled on the ranch in Milk River.

Ranching, vet work and family took up most of his time but he still managed to find time for friends, and to dabble in politics. He retired to Abbotsford, BC in 1984 but the prairies pulled him back eight years later where he relocated in Lethbridge and then to Taber where he helped look after Mom through her final moments. He remained in Taber until his passing.

He spent many hours in the workshop making clocks but always had time to spend with family and friends. During the last couple of years numerous health problems plagued him but they didn’t keep him from enjoying life’s finer moments. Early in the morning of May 28, he left the bounds of this earth to reunite with Mom, his parents, his siblings and many friends. Although we will miss him, we can be assured that his suffering is over and that better times are in store.

We ask that in lieu of flowers, donations be made to the Heart and Stroke Foundation, or the charity of your choice.