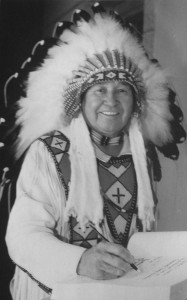 HAROLD WARNOCK HEALY – (1925 – 2015) Aapihkitopii (White Horse Rider) passed away peacefully in the Cardston Hospital to join his most beloved wife Jean Healy (nee Soop) who passed on May 3rd, 2015. Jean was the love of his life and the two were inseparable in life and now in death.

At a young age, Harold’s father passed away. He went to live with his aunt, Janie Gladstone (nee Healy) and uncle, Senator James Gladstone. Throughout his life, he always had a close connection to his Gladstone family, He was especially proud of his nephew, Jim Gladstone, World Champion Calf Roper.

At the age of 9, Harold attended St. Paul’s Anglican Residential School. He stayed at the school until the age of 16. He then worked for the residential school in farming, gardening and carpentry. He went on in his career in carpentry and built many homes on the Blood Reserve.

At the age of 15, he taught himself how to skate, practicing during cold winter days and nights. After much practice and perfecting his glide on the ice, he heard Chris Shade Sr. and Frances Red Crow were scouting for players for a Kainai hockey team, “Native Sons.” To his delight and excitement, he was chosen to play on the first Kainai hockey team.

His love of hockey was so intense that dad and his best friend Gerald Tailfeathers and Gerald’s father Fred Tailfeathers took a hockey vacation to catch all the games of the original six NHL teams in the 60’s. Games they attended were the Detroit Red Wings, Chicago Black Hawks and his all-time favorite team, Toronto Maple Leafs. Unfortunately, before they could go to the remaining three teams, Fred took ill and they returned home. Dad spent numerous hours training and teaching his sons and grandchildren to play the game. Harold and Jean never missed a Saturday Night Hockey game on TV cheering on his favorite team, the Toronto Maple Leafs.

In his early twenties, he moved to Calgary to begin work with Great Western Saddlery company. He developed a craft in leather tooling, another one of Harold’s many trades. While in Calgary, he sought out teams to play hockey with. Through his fast and agile ability on skates, he was picked up by the Calgary A team, an unusual but memorable time for a young First Nation man to play on an all-white team in the 40’s.

After a few years in Calgary, Harold returned to the Blood Reserve and married his beloved Jean in June of 1949. They were married for 64 years and had 6 children, Warnick, Stewart (Karen McDougall), Esther, Carol (Jim Mason), Robert (Lucille Provost), Cordell (Tammy Prairie Chicken), adopted daughter Joyce (Ron) Doore; 19 grandchildren and 17 great grandchildren, and numerous traditionally adopted children from many nations.

As time progressed, Harold & Jean raised their family to the best of their ability and always worked towards a better tomorrow. Harold embarked on his love of pow wow’s. He and Jean began their recreational activities in joining the pow wow circuit. He was known far and wide for his dancing abilities and won numerous champion titles in the Men’s Buckskin category.

In 1977, Harold & Jean were asked to join the Calgary Stampede Indian Village. On numerous occasions, Harold and Jean represented the Stampede, Alberta and Canadian tourism to be ambassadors for Treaty 7 and Canada. They travelled to many countries to represent Kainaiwa, which they did, proud of their heritage to share their Blackfoot traditions.

The opportunity presented itself for the Healy’s to travel to Europe, Australia, New Zealand the Principality of Monte Carlo, and the USA to name a few. This gave them the opportunity to meet highly visible dignitaries, which included the Queen of England–a few times. Even on one occasion, to their surprise, were housed at the Duke of Kent’s home in England. Harold’s out-going nature and his big smile opened many doors for him and usually, by request, has been asked to be ambassador for First Nations people at various functions.

Harold was also part of the traditional Ninamskaiis, Medicine Pipe Bundle. It was always an honor for him to be included in the ceremonies.

Harold gave numerous and countless hours to help and assist those in need. His greatest work was with people in incarceration and corrections. Elder counselling was a job he loved to do. He served 12 years with the RCMP “K” Division in an advisory board capacity, fighting for the cultural rights of First Nation people, promoting capacity building between the RCMP, Government officials and First Nations. Harold and Jean hosted the top ranking RCMP officials for tea, at their tipi, after the Calgary Stampede parade. His other pet project was being president of the Buffalo Nations Luxton Museum in Banff.

In April of 2003, the Minister of Government Services, David Coutts, along with the sitting Premier, Ralph Klein, requested Harold and Jean’s presence in the House of Commons to be introduced to the legislature for his leadership on youth justice issues.

He was known for his ability to bring credibility to the cause of cultural rights in the Justice system. As a result, Governor Schweitzer, of the state of Montana, with son in-law Jim Mason, along with some of the Kainai Corrections staff, were requested to advise and assist in developing American Indian inmate cultural programs. Harold was given special recognition by the State of Montana for his outstanding contributions.

Through Harold’s bold approach and winning smile, he successfully brought much attention to the causes and needs of the First Nation communities. Harold has lobbied Government officials, foundations and charities to raise awareness for needed funds for various projects.

Our kind and caring father was a great man, who has bid us farewell to enter into the biggest grand entry of life. Our Lord and Saviour God will beat his drum as he enters the golden gate arena just for dad.

One Condolence for “HEALY Harold”