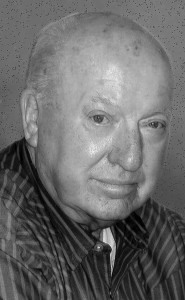 MR. ERWIN EDWARD “KERV” THIESSEN, beloved husband of Mrs. Mildred Thiessen, of Coutts, Alberta, passed away peacefully at the Milk River Health Centre on Sunday, May 24, 2015 at the age of 87 years.

Kerv will be forever in the hearts of his wife, Mildred and children Randy (Joan), Debra (Don), Bruce, James, Michelle (Steve) and Kelly. He will be dearly remembered by his grandchildren Brock, Clay, Tenille, Matthew, Erin, Jason, Kyle and great-grandchildren Emily, Hayden and Rogue. Kerv is also survived by his sister Loretta Coyne and brother-in-law Leonard.

Kerv was born in Holdfast, Saskatchewan on June 19, 1927. His parents, Abram A. and Sara came to Coaldale, where they resided and made it their home. Kerv married Mildred Vornbrock on February 6, 1951 and spent the last 64 years loving her and raising a family. In their early years together, they lived in Taber, Coaldale and Waterton Lakes where they operated a ‘Snack Shack’ for six summers. They moved to Coutts in 1960, where they reside today.

Kerv worked as a Customs Officer at the Port of Entry at Coutts for 18 years. After Kerv retired, he became an entrepreneur business man managing rentals, Kerv’s Korner Convenience Store, the laundromat and RV Park. Kerv was very involved in local politics and worked tirelessly for the people of Coutts.