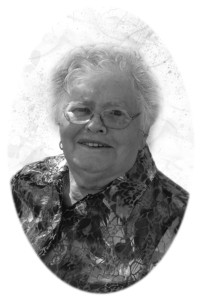 DIANE “DINIE” BERNS, beloved wife of the late Theodore “Ted” Berns, of Lethbridge, AB., passed away at the Foothills Medical Centre on Sunday, June 21st, 2015 at the age of 84 years.

She is the loving mother of John (Isabelle) Berns, George Berns, Ted (Lorrie) Berns, Andy Berns & Nancy (Roy) Schaefer, as well as the adoring grandma of 17 grandchildren and 11 great- grandchildren.

Besides her loving husband, Diane was predeceased by her parents, two brothers, one sister and a daughter-in-law.

Diane was born in Drempt, Holland on April 19th, 1931 to Antonius and Gerarda Vredegoor. She grew up with 12 siblings; five sisters and seven brothers. Diane met her love, Ted and wed on August 5th, 1952. Six days later, on August 11th, they made the move to Canada. Ted and Diane resided on a farm in Swift Current, Saskatchewan where she worked as a homemaker during that time. They continued their journey while expanding their family to Coaldale, Calgary, Okotoks, Claresholm and Lethbridge. Diane’s passions were the Royal Purple, curling, crocheting, knitting, sewing and being present with family and friends. Diane was a social butterfly whose bright smile will forever sparkle in everyone’s eyes.

A Celebration of Diane’s Life will be held at THE OUR LADY OF THE ASSUMPTION CATHOLIC CHURCH – 2405 12th Avenue South, Lethbridge, Alberta, on Friday, June 26th, 2015 at 1:00 P.M. with Father Kevin Tumback, Celebrant.

The family would like to send a heartfelt thank you to the staff at St. Therese Villa, 1st East Wing, for their outstanding care and compassion.

In lieu of flowers and in memory of Diane, donations may be sent to Westminster Elementary School – Breakfast Program – 402 18 St N, Lethbridge, AB. T1H 3G4.