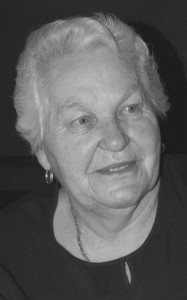 Gladys McLennan (Boyda) passed away Saturday June 20, 2015, surrounded by her family, at the age of 87 years old. She will be lovingly remembered by her family and friends.

Gladys loved her community of Coaldale. Together, Jim and Gladys ran several local businesses, including: McLennan’s Grocery, McLennan’s Jewellery, McLennan’s Bowl, and J & W Vending. The Bowling Alley and J & W Vending held a special place in Gladys’ heart, as they employed, entertained, and fed many local youth over the years. Upon retirement, Gladys continued to enjoy coffee at McLennan’s Cocktails & Cues every morning, where she would visit with her closest friends and family.

Gladys would spend several hours crafting. Her walls were covered with the numerous award winning pieces of petit point, and several closets around Coaldale are filled with her colorful covered hangers.

Gladys is survived by her sisters Elma Volek, Julie Moore and many nieces, nephews, cousins, friends and extended family members.

She was predeceased by her loving husband Jim, daughter Bonnie, and sisters Ann Lakusta and Lily Koliasko.

A Memorial Service will be held at 1:00pm on Friday June 26, 2015 at COALDALE UNITED CHURCH, 2022 18th St, Coaldale, AB followed by a reception at the Coaldale Community Center.

In lieu of flowers, donations can be made to Coaldale Emergency Services: PO Box 1571, Coaldale, AB, T1M 1N3.