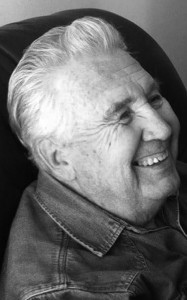 In loving memory we mourn the loss of WILLARD M BROOKS (Bill) who passed away in Calgary on July 10, 2015.

He was born in Cardston on July 29, 1933 where he grew up playing sports, hunting and fishing. He served an LDS mission in Ontario, Canada and returned home to marry his sweetheart, Dawn Mendenhall on March 7, 1956 in the Alberta Temple. He went on to attend BYU, returning home to Alberta to teach in Raymond, Warner and Taber. He later moved to Edmonton while working for the Alberta Teachers Association. He took a sabbatical in 1983 to get his Masters degree at the University of Victoria and published a book on “Education in China”. He returned to Edmonton and later moved to Calgary while still working for the ATA. He retired in 1991. They then moved to Pleasant Grove, Utah for a year prior to returning home to Raymond. He served on the town council for 3 years prior to becoming Mayor. He continued with his love for golfing, fishing, dogs and roses. He was honored to serve in the Cardston Temple for 17 years. He will be greatly missed.

He is survived by his wife, Dawn, their children Tom (Loreen), Kelly (Kevin) Smith, Rick (Sheila), Cam (Kim), Bill (Andrea), Jeff and daughter-in-law Doreen, and their families. His surviving siblings are: Laura (Dale- deceased) LeBaron, Kathy (Bill) Richards, Dennis (Laura), and Eric (Lori) and sister-in-law Sharyn. He was predeceased by his parents Willard and Bernice, brother Ben, and sons Micheal and Jackie. Friends may meet the family on Tuesday, July 14th at the TAYLOR STREET CHAPEL in Raymond, AB from 7:00 to 8:00 p.m. or at the Church on Wednesday July 15th from 10:00 to 10:45 a.m. prior to the Service.

The Funeral Service will be held at The Church of Jesus Christ of Latter-day Saints, TAYLOR STREET CHAPEL, 4th West Hwy 52, Raymond on Wednesday, July 15th, 2015 at 11:00 a.m. Interment to follow in the Temple Hill Cemetery, Raymond, Alberta.