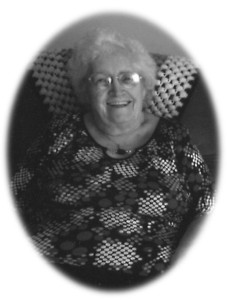 Gerarda (Gerdie) Greene of Lethbridge, beloved wife of Jack Rice, passed away at Chinook Regional Hospital on July 18, 2015 at the age of 82 years.

Born in Mill, Holland on April 17, 1933, Gerdie and her family immigrated to Canada in 1948 to the Lethbridge area. Gerdie took great pride in becoming a Canadian citizen and worked hard at learning the customs and language of her new country. While working at the Carmangay Hospital she met her future husband Boyd Greene. They married on July 27th, 1951 and made their home east of Carmangay on the Marvin Greene homestead, later moving to the John Olson homestead where they resided until moving to Lethbridge in 1993. Gerdie was very active in the Carmangay community. She enjoyed crafts, sewing, cake decorating, camping, travelling and going to the casino. A few years after Boyd’s passing, Gerdie met Jack Rice and was married on August 5, 2007. They resided in their home in Lethbridge until her passing. Gerdie’s greatest pleasure was spending time with family and friends.

Gerdie was predeceased by her loving husband Boyd Greene and her parents Gerardus & Hendricka Hurkens and Marvin & Pearl Greene. She was also predeceased by her granddaughters Erin and Megan Hyslip and son in law Mark Halverson. Numerous brothers, sisters, nieces, nephews and friends.

For those who wish, memorial donations in lieu of flowers may be made to STARS Air Ambulance, 1441 Aviation Park NE, Box 570, Calgary, Alberta, T2E 8M7.