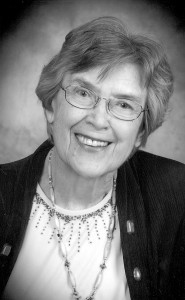 JANETTE ALEXANDRA MCLEAN SHEETS, (nee Munro) beloved wife of the late Melvin Lee Sheets of Lethbridge, passed away peacefully at the Coaldale Health Centre, on Wednesday, July 22, 2015 at the age of 89 years.

Janette was born on April 24, 1926, the second of four children born to Alexander and Rhodina Munro of Calgary. As a child, Janette loved school, was a dedicated Girl Guide, enjoyed track and field and was a competitive highland dancer.

In 1943, she graduated from Central High school in Calgary, attended Normal School for three months and then began her teaching career in a one room school near Rocky Mountain House, Alberta at the age of seventeen.

After several other teaching assignments, Janette was teaching at Barhill School, where she met Melvin Sheets. They were married on June 20, 1947 in Calgary. Mel and Janette bought a half section of irrigated land eight miles north of Picture Butte and farmed there until 1973. Janette continued to teach and help with the farm while raising four children. After many years teaching in the County of Lethbridge, Janette was chosen to set up many of the school libraries in the County, during the late 1960s. She then attended the newly opened University of Lethbridge and completed her Bachelor of Education with Great Distinction in 1973.

Mel’s health took a turn for the worse and the family moved to Lethbridge in 1973 where Janette, after a short stint as a real estate agent, took a faculty position at the Lethbridge Community College. Janette ran the Developmental Studies Centre at the College for fourteen years. She and her staff touched many lives through their work developing and delivering individualized upgrading programs to help thousands of LCC students succeed. In 1990, she received a Leadership Award from the Association of Canadian Community Colleges for her work at the College. She was also nominated for a Women of Distinction award during this period.

Janette retired from the College in 1991 and became active in numerous organizations in the city including the University Women’s Club, United Church Women, Ladies of Kiwanis, Meals on Wheels, the Lethbridge Soup Kitchen and many other organizations. She loved to read, travel and to attend community events, concerts and theatre.

The family would like to thank all of the dedicated, friendly, and professional staff at the Coaldale Long Term Care Centre, Columbia Assisted Living, the GARU and ER units at Chinook Regional Hospital, the PARP and Bridges programs at St. Michael’s and all the other caregivers, medical staff, and physicians who have helped care for Janette as her health declined over the last few years.

A Celebration of Janette’s Life will be held at MCKILLOP UNITED CHURCH, 2329 – 15 Ave South, Lethbridge on Wednesday, July 29, 2015 at 2:00 P.M. with Reverend Aldeen McKay officiating.

Following the Celebration of Janette’s Life, friends and family are invited to stay for a reception in the church hall.