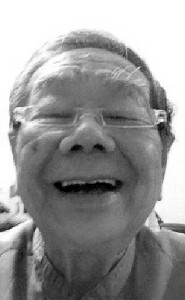 ELPIDIO “DEL” DELFINO, JR. passed away peacefully on July 28th with his wife by his side. He is remembered for his deep love of family, sense of humor and good times that he loved to share with all. He was a caring and compassionate gentleman, always thoughtful and giving. He will be missed by all his loved ones.

Beloved husband of Nieves “Babe” Delfino, beloved father of Cindy O’Neill and her husband Dermot, cherished grandfather (Lolo) of Damien Delfino and his wife Joanne, great- grandfather of Aria Delfino, brother of Corazon Delfino Beloy and also survived by many cousins, nieces and nephews, who called him “Tio Dodoy”.

Born on April 14, 1930 in Canlubang, Laguna, Philippines to Elpidio Delfino, Sr. and Alejandra Garcia Delfino, Del was the second youngest son with 6 brothers and 5 sisters. His sister Cora sang on DZMB Radio Station in Manila with Nieves “Babe” Reyes. Del was Babe’s “Number 1 Fan”. He and his father sat in the front row when Cora and Babe performed. Del and Babe married. Del studied architecture and graduated in the top of his class from Mapua Institute of Technology and the University of the Philippines. Although he loved and appreciated good music, he never had a chance to take up a musical instrument but instead opted to design and create beautiful architectural structures.

In 1968, Del and Babe moved with their young daughter from the Philippines to Vancouver, BC. A year later, they moved to Yellowknife, NT where Del was the architect of the Yellowknife City Hall, École St. Joseph School and the Seventh Day Adventist Church.

For the past 40 years, Del and Babe have made their home in Lethbridge, AB. There they had many projects. For a brief time, they even lived in Maui, Hawaii where they made bikinis. Del could spot the ones he made that he saw on the beach. Back in Lethbridge, Del and Babe made rosaries that they sent to Catholic missions around the world.

One Condolence for “DELFINO Elpidio”