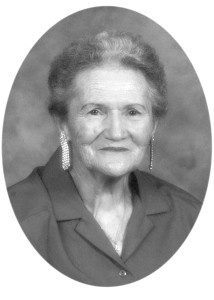 MARY THERESA (nee TARNAVA) PETERSON, passed away peacefully on August 9, 2015 at the age of 92.

There was great rejoicing in heaven when she finally rejoined her husband, after being separated by death for 37 years, her parents, her six brothers and sisters and many family members and friends.

Mary was born on August 28, 1922 in Lethbridge and was the youngest of seven. Mary attended the Catholic schools and she always lived on the north side, which she took great pride in.

Her Polish heritage, family and Catholic faith were her strongest foundation. She spoke fluent Polish and cooked Polish food exquisitely. She loved baking, cooking, spending time with family, music, dancing and her greatest joy, her garden. Her garden resembled that of something you would expect to see in heaven; perfection, especially the beautiful roses she grew. She loved her family with her whole being and gave everything she had to them. She was very proud of all their accomplishments. Mary was a very kind, loving soul.

Mary had a special devotion to the Virgin Mary, Jesus and the Pope. She always had a rosary close by. She was a life-long member of the CWL, the Polish Society and The Eagles. She had many sayings like “Go On” and “Eat”. Mary and George operated City Taxi and Novelties together and they had pinball machines and a store. She took care of her parents as they aged. She was always a hard worker and worked many jobs in her lifetime. George and Mary loved travelling and had a special spot in B.C. at Gold Creek that they spent many happy times together fishing and relaxing. Mary will be remembered for her smile, laugh, shoulder to cry on, ability to listen, hospitality and sacrifice for others. Mary and George leave behind a legacy that included family, faith and two children with enormous musical accomplishments. Mary and George were never forgotten by the many friends made through places such as the City Police and the New York Hutterite Colony.

Mary was predeceased by her husband George, parents Valentine and Sophia, siblings: Alexander, Matthew, Michael, Joseph, Margaret, and Sophie, her In-laws Christian and Alice Peterson and numerous other family members and friends.

A Funeral Mass will be Celebrated at ST. BASIL’S CATHOLIC CHURCH, on Thursday, August 13, 2015 at 10:00 A.M. with Father Lukas Drapal, Celebrant.

If friends so desire, memorial tributes may be made to The Heart and Stroke Foundation of Alberta, P.O. Box 2211, Lethbridge, AB., T1J 4K7