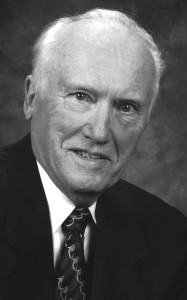 Ernest (Ernie) Leonard Siemens of Lethbridge, beloved husband of the late Eleanor Siemens, passed away at the Edith Cavell Care Centre, on Wednesday, August 26, 2015 at the age of 86 years.

During his teaching career; Ernie taught school at Sunset School near Nanton, the Morley Indian Residential School, Nanton Consolidated, Wilson Junior High, and Agnes Davidson Elementary School in the Lethbridge District. In his retirement years, he worked for the Salvation Army.

It was Ernie’s delight to help his students learn and he was involved in many extra-curricular activities like chess, photo and science clubs. For hobbies, he avidly pursued photography and collecting butterflies. He is probably best remembered for his church work, broad smile and his Stetson hat.

Besides being predeceased by Eleanor, his wife of almost 60 years, Ernie was predeceased by his parents George and Anna Siemens, and his brother Ben.

A Memorial Service will be held at 11:00am on Friday, September 4, 2015 at the COALDALE MENNONITE BRETHREN CHURCH, 2114 – 18 Street Coaldale, Alberta, with Pastor Gary Burke officiating.

A Private Family interment has taken place prior in the Coaldale Mennonite Cemetery.

One Condolence for “SIEMENS Ernest”