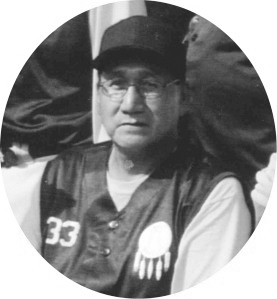 It is with heavy hearts and profound sadness that we announce the passing of a Loving Husband, Father, Brother, Uncle, Nephew and Friend, BERNARD WOLF CHILD, who passed away suddenly on August 31, 2015, in Moses Lake (Cardston), Alberta at the age of 56 years.

Bernard was born at the Blood Indian Hospital in Cardston, Alberta on June 9, 1959 to (the Late) Cecilia Gros Ventre Boy and (the Late) Anthony “Tony” Wolf Child. Being raised in a large family, Bernard was taught the value of “hard work” and the importance of family by his parents and older siblings. He received his early education from Cardston High School and his apprenticeship training in Mechanics. He was most notably known for his skills and abilities as a “jack of all trades.” Bernard found full time employment with Kainai Board of Education as a Janitor at the Tatsiikiisaipo’p Middle School. He married his wife Beverly and together they raised their children and grandchildren in a nurturing, loving and welcoming home. Bernard loved and adored his children and grandchildren, always showing encouragement and fatherly support whenever they needed him.

Filled with boundless energy, Bernard was also an avid sportsman; excelling both in Fastball and Hockey. Bernard was known as somewhat of a local “globe trotter”. His love for sport, his employment and spirituality led him on many journeys with family, friends and team mates across Canada and the United States. He embraced life with endless enthusiasm.

Bernard always greeted people with a smile; a characteristic befitting of such a kind-hearted, giving, gentle soul. He will be remembered for his enthusiasm, dedication and “hard work” mentality, especially his ambitious, outgoing personality that was felt by all who knew him.