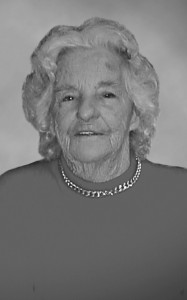 Adeline was born in Cardston, Alberta on November 22, 1920 to Robert William Beck and Minnie Amelia Turner Beck. Adeline was the second daughter of a family of eight children. She grew up and went to school in Cardston and enjoyed her childhood exploring the beautiful green valley, picking flowers on the hillsides, and swimming in Lee Creek with her brothers and sisters and friends. As a young girl she held down various jobs, including housekeeping at the Cahoon Hotel and working at the egg grading station. She stayed with family at Waterton Park while her dad helped to build the Prince Of Wales Hotel. She was best friends with Rose Kennard and, after Rose lost her husband Nelson, Adeline stepped up to the plate and helped raise her son Clayton while Rose worked to support them. She loved Clayton (Cork) as if he were her own child and that bond carried forward to his children and grandchildren.

Adeline’s love for animals and yearning for a country life became a reality when she, Rose, Cork and his young family began ranching in Pole Haven and, later, Beazer, Alberta where they raised sheep and cattle with a view of the beautiful Rockies and Chief Mountain. Adeline chopped wood, pumped water from the well on the hill, doctored the livestock, and helped to bring many animals into the world. Friends, family and neighbors were always welcome at the Ranch and they came. Adeline baked and would offer delicious homemade bread; no one ever left hungry. She helped to take care of many nephews, nieces, grandchildren, and cousins who came there to fish, go on picnics, and have adventures.

The Funeral service will be held at The Church of Jesus Christ of Latter-day Saints, SOUTH HILL CHAPEL, Cardston on Thursday, September 17th at 11:00 a.m. Friends may meet the family from 10:00 to 10:45 a.m. prior to the service. Interment to follow in the Cardston Cemetery.