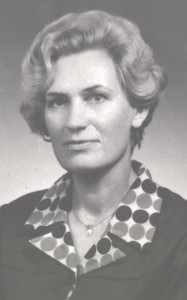 Mrs. Krystyna Czeslawa Kasperski of Lethbridge, beloved wife of the late Mr. Stanislaw Kasperski, passed away peacefully at St. Michael’s Health Centre on Thursday, September 10, 2015 at the age of 84 years.

Krystyna was born in Poland on March 12, 1931 where she was raised and educated. Her hard work and dedication resulted in her working for a number of years in the accounting field. In 1954, she married Kazimierz Sobieszuk who passed away in 1982. In 1987, Krystyna met and married Stanislaw Kasperski in Lethbridge. She resided in Lethbridge until her passing.

Krystyna is survived by her son Waldemar and his wife Krystyna, grandson Lukasz (all of Poland), sister-in-law Mary Uwazny, nephew Fred Uwazny, niece Elane Fredrickson, as well as numerous nieces, nephews and their families; both in Canada and Poland.

She was predeceased by her parents, husbands, brothers and sisters.

Krystyna was a devout Roman Catholic, attending mass regularly and volunteering her time to all events. She also practiced what was preached, with her genuine kindness, and always willing and able to lend a helping hand to anyone in need. She frequently volunteered her time at the Polish Canadian Association by organizing and preparing meals for special events.

Most of Krystyna’s life was spent gardening, cooking and baking, which she loved all equally, especially when she had the chance to share with friends. She also liked to crochet and do other crafts which she would give away to friends or donated to charities. Her favourite way to relax was to do puzzles or Soduko.

Krystyna and her family would like to thank all of the doctors and nursing staff of the Chinook Regional Hospital and St. Michael’s Health Centre for the care they provided during her illness. Krystyna would also like to thank everyone for their prayers, love and support, especially to the Prozniak family (Josefina, Joe and Zosia), Ismeta and EddyBajraktaveric, Matt Malinowski, Aida and Eugene Wilamowicz.

A Funeral Mass will be held at 2:00pm on Thursday, September 17, 2015 at OUR LADY OF THE ASSUMPTION CATHOLIC CHURCH, 2405-12 Ave. S., Lethbridge, AB with Father Lukas Drapal, celebrant. Interment to follow at Mountain View Cemetery.