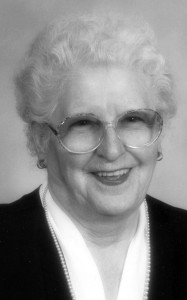 Margaret Simmons beloved wife of the late Bernard Simmons passed away suddenly at her home in St. Therese Villa in Lethbridge early Tuesday, September 15, 2015 at the age of 94 years.

Margaret was born near Ottawa, Ontario and moved at an early age to Toronto where she lived with her mom and dad, Fred and Anna Butt, and brother and sisters, Lillian, Fred, Joan and Marion. Bernie and Margaret started their lives together while Bernie was stationed in Ontario during the war. They got married in Toronto and spent time in Quebec and Prince Edward Island before returning to Lethbridge after the war. Margaret was very involved in Southminster United Church and was always ready to help those in need in the community. We don’t know how many hundreds of pairs of toques and mitts are out there as Margaret ended up being a drop off spot for wool and was always knitting. Margaret lived in the same home from 1947 until last summer, the neighborhood was never the same without Margaret riding around in her power chair.

A loving caring mother, Margaret is survived by her 5 children; Gary (Whyspers), Suzanne Dawson, Craig, Nancy Dawson and Scott (Bunny). Margaret was also blessed with eleven grandchildren and numerous great grandchildren. Our family would like to thank the staff at St. Therese Villa for the wonderful care they gave Mom over the last year. She appreciated the pleasant nature and kindness the staff showed her and thoroughly enjoyed meal time.

The family will hold a Private Memorial Service and Margaret will be put to rest in the Queen’s Park Cemetery in Calgary.

One Condolence for “SIMMONS Margaret”