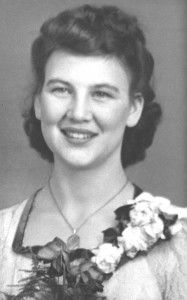 Besides her loving spouse Carlos, Muriel was predeceased by her eldest son Murray Gordon; infant son Everett; and her parents Minto and Grace Hobbs of Kathyrn, Alberta.

She was born in Calgary, Alberta in 1924. She graduated grade 12 from Kathyrn School and after getting married she continued her education at Olds College, completing her Home Economics Diploma. Muriel was employed with Agriculture Canada after previously working at St. Michaels Hospital and as a medical and dental assistant.

She was a member of OSA Agriculture, the Army & Navy Club and the Royal Canadian Legion. Muriel initiated with the Order of the Eastern Star with Evangeline Chapter #87 lrricana on May 17, 1944. In 1951 she held the position of Worthy Matron of her Chapter. She affiliated with Maple Leaf Chapter No.7 in 1987 and became a member of the 70 years plus club in 2014. She was a Bethel Guardian of Bethel #2, IOJD and a Grand Guardian Chaplain of Alberta.

She was a loving mother, grandmother, great grandmother and cherished times spent with her family and friends.

At Muriel’s request, the family will be celebrating her life at a Private Family Service at a later date.

In Mom’s own words, “Thank you. You know I’ve loved you all from the moment I laid eyes on you. God Bless and keep you safe”