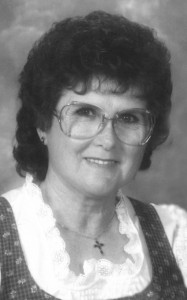 Trude Graham of Warner, Alberta, beloved wife, mom and Omi, passed away peacefully on Monday, September 21, 2015 at the age of 85 years.

Trude was born in Austria on August 7, 1930 to Josef & Valerie Schinkora. It was while living in Austria that she met and married Robert Kuikahi. Following the end of WWII she moved with her new husband to Hawaii, where they lived for 7 years and started their family. Years after Roberts’ passing, Trude met Terry Graham and began her new life in Canada after their marriage. She resided for over 30 years in Canada on the Graham family Ranch east of Warner until her passing

She will always be loved and remembered by all who knew her.

She was predeceased by her loving husband Terry Graham.

Those who wish, memorial donations may be made to the Warner Hockey School, at Warner School, Box 150 Warner, AB T0K 2L0.