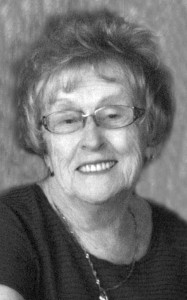 Helena (Helen) Alita Gaetz of Lethbridge beloved wife of Joseph Gaetz passed away peacefully on September 24, 2015 at the age of 85.

Helen was born on November 2, 1929 in Young, Saskatchewan to Jacob and Carolina Stephan. She attended school in Young, Saskatchewan. Helen moved to Lethbridge where she met her loving husband Joe, together they raised their two children. Her greatest joy was her family. Helen’s many talents were baking, cooking, gardening, knitting, crocheting, sewing and creating crafts of all kinds. Helen loved to play cards with her family and friends. She also enjoyed camping with her family and friends. Helen worked at Catelli’s, the Lethbridge College as a custodian and Lethbridge Collegiate Institute in food services. She was a very active volunteer at the Christ Trinity Lutheran Church and an active member of the Nordbridge Seniors Centre.

A Memorial Service will be held at 2:00PM, on Wednesday, September 30, 2015 at MARTIN BROTHERS FUNERAL CHAPELS, 610 – 4 Street South, with Pastor Tom Peterson officiating.

Flowers are gratefully declined. Those who wish, memorial donations may be made to the Good Samaritans Society, 1511 – 15 Avenue North, Lethbridge, Alberta T1H 1W2

One Condolence for “GAETZ Helena”