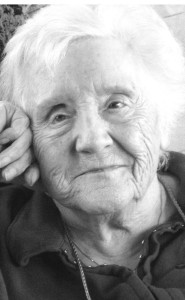 LILIAN MAUD WILBOR, cherished wife of John Wilbor of Coaldale, passed away peacefully with elegance at the Chinook Regional Hospital, on September 25, 2015 at the age of 91 years.

Lilian made a career in the Royal Bank of Canada where she broke many barriers for women in banking, like staying employed after marriage and pregnancy.

Lil met John Dunn Wilbor, and married in 1957, renewed their vows in 2007 and had an epic love affair that has spanned 7 decades and produced two daughters. Together there was nothing they would not try, they lived in Calgary, Dawson Creek, Edmonton, Delta, New West, Surrey and Coaldale.

Mom was a lovely woman who lived her life with dignity and grace and will be dearly missed by all who knew her. Left to mourn her passing and celebrate her life are husband and soul mate John, daughters Joni (Dan) Cahill, Lori (Tim) Gibson and grandchildren Pam, Chris, Mike (Liana), J.C., Sarah, Erin and Bryson, as well as her extended family and the many friends she made throughout her lifetime.

Lilian would like to be remembered as a loving and gracious wife, mother, grandma, sister, aunt and friend.

A Celebration of Life will be held at the ANGLICAN CHURCH OF ASCENSION, Coaldale, Ab, on Saturday, October 17, 2015 at 1:00 P.M. with Canon Erin Phillips officiating.

One Condolence for “WILBOR Lilian”