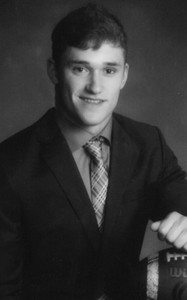 It is with great sorrow the families of BROCK PATRICK RAMIAS, who left the game of life too soon, share his passing on October 19, 2015.

He will be remembered with love by his mother LaVonne (Tony) Rideout and his father Mark Ramias, his brothers Brett Ferguson (Kara and daughter Brooklyn) and Troy Ramias, as well as Brock’s special friend, Ashley Karren. Also left to mourn are his grandmothers Carole Ferguson and Mary-Ellen Ramias and a large extended family of aunts, uncles and cousins. He shared his love with many others and has families and friends that keenly share his loss.

He was predeceased by his grandfather, Tom Ferguson.

Brock was born on February 13, 1995 and spent his growing up years in the Lethbridge area. He graduated from Lethbridge Collegiate Institute in June 2013.

Brock adored his parents and his brothers. He was their greatest fan and protector. His families treasure the many memories of working and playing together on the farm, at the lake and at home. He was fun and full of joy and a hero to each of them.

Brock was a gentleman who was respected and was loved by many and he returned that love. He was well known within his school and the community as a playful, generous young man. He could be found playing a competitive game of stick ball, watching a Cinderella movie, drinking a slurpee or just having a quiet conversation with a good friend. Brock loved being with people; he remembered them and made each one of them feel special and cared for, no matter their age or their circumstance in life. He was keenly aware of friends and strangers alike, reaching out to all those he met along the way or found in need. While Brock was always athletic and played a number of different sports, it is no secret that Brock loved football. His football family was very important to him and some of his best friendships were forged on the field. He was known for his hard work, competitive drive and sportsmanship. He left everything out on the field every time he played and he was always working to be better. While Brock worked at a number of jobs, his life’s occupation was football. He recently returned to LCI as a volunteer coach with the LCI Rams this football season.

Brock leaves behind his great love for each of us and love enough to spare and share; he would want us all to pass it forward.

Donations in Brock’s memory may be made to a scholarship in his name at http://gofundme.com/8m6wbmag

One Condolence for “RAMIAS Brock”