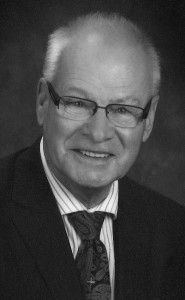 HERMANUS “HERMAN” HOOGERDIJK of Lethbridge was called home by our Lord and Saviour, surrounded by his family at St. Michael’s Health Centre, Palliative Care Unit, on Tuesday, October 27, 2015.

He is lovingly remembered by his children: Marj (Kelvin) Van Dasselaar, Martin, James (Marlene) and Herman Hoogerdijk (Teri Holmberg), 11 grandchildren and their spouses as well as nine grandchildren.

Herman is also survived by his siblings, Cornelus (Hermina) and Leonard Hoogerdijk as well as two sisters-in-law, Marty and Rika Hoogerdijk.

He was predeceased by his wife of 53 years, Anna (nee Jongs), his parents Maarten and Marrigje Hoogerdijk, two brothers, Willem and Dirk Hoogerdijk and sister-in-law, Arentina Jacoba Hoogerdijk (nee Velvis).

Herman was born on April 21, 1936 in Delft, the Netherlands. He loved his Lord, his church and his family. Herman was an active member of the Lethbridge Christian Men’s Choir and was also very involved in Prison Ministries for many years.

A Private Family Burial will be held at ROYAL VIEW CEMETERY.