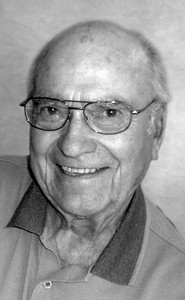 GEORGE ANDREW GANGUR, beloved husband of Mary Ellen Gangur, of Lethbridge, passed away peacefully at St. Therese Villa, on Friday, October 30, 2015 at the age of 85 years.

George was born on October 15, 1930 at Eight Mile Lake. He grew up on a farm in Southern Alberta with seven brothers and one sister. George worked as a truck driver at Broder’s Cannery and worked his way to Superintendent. Fishing and hunting were his passions; in fact George claimed he was never skunked. He and Mary Ellen owned and operated two campgrounds, stores and a restaurant in B.C. His creative ability in the restaurant kitchen made him famous for miles around.

From 1982 to 2004, the two of them wintered in Arizona and George finally had time to pursue painting and jewelry-making. He belonged to the Knights of Columbus and was a 50-year member of the Royal Canadian Legion. He and Mary Ellen celebrated their 40th Anniversary on October 3rd.

From 2004, illness prevented further travel and George spent his last few years close to home enjoying his family, friends, neighbors and his greatest joy, his grandchildren and great-grandchildren.

In lieu of flowers, donations may be made to the Parkinson Society of Canada, 4211 Yonge Street, Suite 316, Toronto, Ontario. M2P 2A9