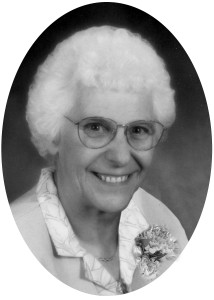 Dini fell in love with Cliff, a Canadian solider at the end of WWII and they were married on May 8th, 1946 in Hilversum, Holland. She then immigrated to Canada as a War Bride, travelling alone at 21 years of age. Cliff waited for her arrival at Pier 21 in Halifax. She never returned to Holland, as Canada was her new home. They lived for a short time in Belleville, Ontario on the family farm. The couple soon moved to Lethbridge and Dini’s parents and siblings joined them from Holland in 1948. She was an active member of the Alberta War Brides Association, making many friends. Dini worked for a number of years at Leo Singer’s Men’s & Boys Wear in sales and as a seamstress. She was a very active member of the First United Church and was very passionate about singing in the choir.

The family would like to express their heartfelt thanks to the staff at Extendicare for their wonderful compassionate care over the last five years. Dini enjoyed living there and felt very close to everyone.

A private family service will be held at a later date with burial in the Field of Honor beside her husband.

In memory of Dini, memorial tributes may be made to Alzheimer’s Society, 740-4th Avenue South, Lethbridge, AB T1J 0N9.