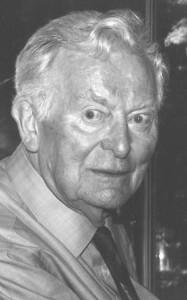 With sadness, the family of Al Kenwood announces his passing at the age of 91 years. He leaves his wife of 64 years Veronica (nee Pyne), his sons Paul (Cindy), Stephen (Jill), and Brian (Kelley); his daughters Cecily and Laura (Bobby); his grandchildren Jon Paul, Camilla, Connor, and Madeleine; and Kelley’s sons Ryan, Colton and Hunter. He was predeceased by his son John Thomas, his parents Anthony and Jessie Kunigiskis and his brother and sister-in-law Joe and Betty Kenwood.

Al was born in Kalvarija, Lithuania. His family immigrated to southern Alberta in 1928, taking residence in Lethbridge where he was raised and educated. Al attended McGill University, graduating in 1948 from the Faculty of Engineering. He began his professional endeavours as a civil engineer in the offices of Meech & Mitchell, Pool Construction and Oland Brothers Construction. With his father and brother, Al established Kenwood Engineering Construction Ltd. in 1957, leading the business until his retirement in 1999. Under his direction, his family’s business left a legacy of one of southern Alberta’s preeminent construction firms. Albert was the president of the Lethbridge Construction Association in 1964.

Al was an avid sports enthusiast, known widely for his commitment to the play and development of golf at the Lethbridge Golf and Country Club, Henderson Lake Golf Club and Paradise Canyon. He and Vera traveled extensively, often with their golf clubs at hand.

His family wishes to express its sincere thanks to the staff at St. Therese Villa, Dr. Colin Walsh, Gwen Oliver and the many others who provided care and compassion in his late life.

Flowers are gratefully declined. In memory of Albert donations may be made to the John Kenwood Scholarship Fund through the Community Foundation of Lethbridge (A: Unit #50, 1202 – 2 Avenue South Lethbridge, AB, T1J 0N1 and T:403.328.5297).