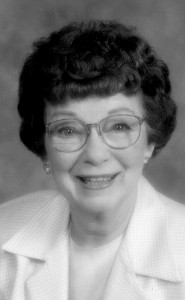 Irene never forgot her roots in Galahad, Alberta, where she was born in 1921 and grew up in a large family. She became a teacher, married husband Paul, and upon his return from World War 2 service, lived in Edmonton, then settled in Lethbridge. She ensured that her children use their gifts and talents to enhance their educations and she was always delighted with their accomplishments. She and Paul had a rich and fulfilling life with many friends while golfing, playing bridge, travelling and enjoying their lifelong passion for politics. Choosing a party to support was never a dilemma! Irene was predeceased by her husband, Paul, in 1976.

She embraced her new life as a single parent with passion and determination. She returned to teaching and helped many ESL students become more confident in communication. Prayer and reading were part of her busy routine.

She was so grateful that Stewart Wells entered her life and they married in 1987. Together, they enjoyed many cruising adventures, golf excursions, bridge get-togethers, and eventually, a slower lifestyle. They supported each other through difficult times and many ailments. Stewart died in September, 2013.

Irene always had a genuine interest in the lives of her family and friends and they were the center of her prayer life. She was a devout Catholic who served on CWL committees, and volunteered for many church, school and community functions.

Funeral Mass will be held at OUR LADY OF THE ASSUMPTION CATHOLIC CHURCH, 2405 – 12th Avenue South, Lethbridge on Tuesday, December 8th at 1:00 P.M.

In memory of Irene, contributions may be made to a charity of your choice.

One Condolence for “WELLS Matisz”