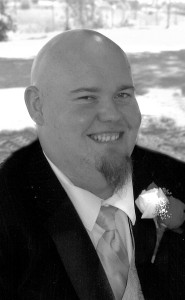 It is with profound sadness that we announce the passing of Douglas “Doug” Snowdon on Sunday, December 6, 2015.

Doug was an avid outdoorsman and an excellent hunter. His love for animals was what made him so special. He excelled in the meat cutting trade and was also well known for his creativity in drawing, music and culinary arts.

Doug is survived by his wife Melissa (Emond) Snowdon; parents Jim and Dianna Snowdon of Fort Macleod; sister Tammy (Rick) Hawes; nephews Griffin and Logan from Cranbrook; grandmother Grace Kennedy; many aunts and uncles and lots of special close friends who were like family to Doug.

Doug was predeceased by his “fur kids” Sahara and Winston, who were extremely special to Doug.

Doug will be dearly missed, he was loved and cherished by so many. He was kind hearted, caring, and generous..

A Funeral Service will be held on Monday, December 14, 2015 at 10:00am at the MARTIN BROTHERS RIVERVIEW CHAPEL, 610 4 Street South, Lethbridge, Alberta, with Pastor Scott Currie officiating.