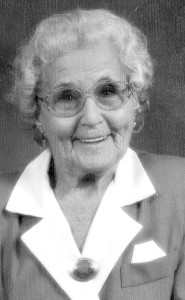 Alice Maude Davies of Lethbridge, beloved wife of the late Arthur Davies, passed away peacefully, on December 5, 2015 at the age of 101 years.

Alice was born in Shoreditch London, England. She was born to the sound of “Bow Bells”, making her a true Cockney. She lived in London throughout World War I and II, before moving to Cornwell. Alice moved to Canada in 1977 with her family to Mannville, and in 1978 she moved to Pincher Creek. It was there that she was involved in many community groups and forged many lasting friendships. She loved to travel, dance and entertain others with her humorous skits. In 1993 she moved to Lethbridge, residing at Halmrest Manor, Pemmican Lodge, and Legacy Lodge until her passing. She had a zest for life and always made and impression with those she met. Alice was a devoted Grandmother and extremely proud of her grandchildren and great grandchildren. She was loved by many and will be dearly missed.

Special thank you to the staff at Legacy Lodge.

Flowers are gratefully declined. Those who wish, memorial donations in Alice’s name may be made to the charity of your choice.