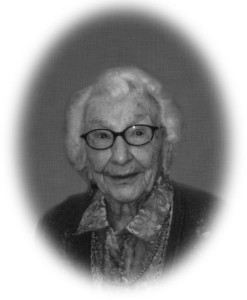 MARGY KIRK-HADDAD, beloved wife of the late George Haddad of Lethbridge, passed away at the Good Samaritan Society on Sunday, December 20, 2015 at the age of 99 years.

Margy is survived by her step daughter Beverly Harmon of Nanaimo, B.C. as well as numerous nieces and nephews.

She is predeceased by her parents Richard and Nazara, Six brothers; Nazem, George, Sam, Joe, Bill and Alfred, and two sisters; Marie and Hannah.

Margy was born in Swift Current, SK, on May 17, 1916. She completed her education as an accountant in Regina and Winnipeg. Margy moved to Lethbridge in 1974 to work with her brothers at Kirk’s Tire until her retirement in 1982. She was a caring giving person who enjoyed spending time with her family. Margy was very generous of her time always giving of herself to others.

At Margy’s request, no formal funeral service will be held.

She will be laid to rest in her husband’s plot in Mountain View Cemetery.

In memory of Margy, memorial donations may be made to a charity of one’s choice.