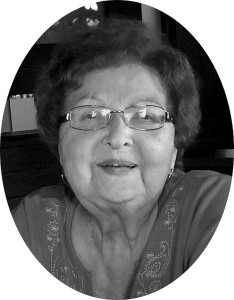 FLORENCE HELEN GILLETT, beloved wife of the late Roger Gillett (2014) passed away peacefully on December 31, 2015 surrounded by her family.

Florrie was born in Coaldale, Alberta. With her Dad working for the CPR, she travelled around Alberta with her family to Coalhurst, Manyberries, Coaldale with her Grandparents and then Wilson Siding to finish grade school at White and McNally Schools. Florrie enjoyed riding around the countryside on her bike with her best friend Iris.

Florrie attended Mt. Royal College in Calgary to learn to be a stenographer and after working in Calgary moved back to Lethbridge where she met Roger at the Trianon Dance Hall. They were married at St. Augustine’s Church in 1954 and together they lived in Calgary, Medicine Hat, Prince George and back to Lethbridge in 1967 where they settled to finish raising their family.

Florrie was a very loving, kind and gentle person. She was a voracious reader, a fabulous cook and a mostly unbeatable Scrabble player. Florrie embraced technology and was an active Facebook member which allowed her to play online scrabble games with her family and keep up on everyone’s active lives. She was very organized and had a list for everything, which kept regular gatherings at the house running smooth as her family grew. Florrie loved birds and had a great knowledge of them, she enjoyed her quiet time at the family cabin in Whitefish reading and watching the hummingbirds.

Florrie took much joy spending time with family and friends, golfing at Henderson Lake Golf Club, and supporting the Lethbridge Hurricanes. She was heavily involved in the Girl Guides of Canada working in their Lethbridge office for 28 years and later volunteering at camps and helping out with their bookkeeping. She received a Government of Canada commemorative medal along with countless accolades for her contributions in the Guiding community.

Florrie was predeceased by her parents Michael and Jenny, her sister Margie, and her loving husband Roger.

Florrie’s smiling face and unbreakable spirit will be missed by all who knew her.

The family would especially like to thank Dr. Strank, Dr. Jantzen and Dr. Cantel along with Melissa from Home Care and the many great health care workers in Lethbridge and Calgary that helped our Mom.

In lieu of flowers, memorial donations may be made to the Chinook Regional Hospital Foundation, 960-19th Street South, Lethbridge, AB T1J 1W5.