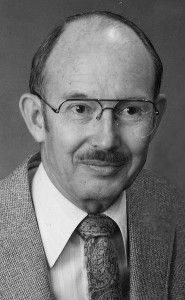 Russell Douglas “Doug” Grigg, passed away peacefully on Friday, December 31, 2015 in his 94th year. He was preceded in death by his parents, William and Erma (Dafoe) Grigg, his sister, Lois Swailes, and his beloved wife, Betty (Bell) Grigg.

Doug was born on March 6, 1922 in Saskatoon and like others on the prairies, he experienced the miseries and deprivations of the Great Depression. When Doug finished high school, he tried to join the air force as a pilot, but his hay fever ended that dream. A clever student, he then accepted a job to run a work crew at a California aircraft factory, but soon returned to Canada to join the Navy. The service took him the length of the country; he was in Halifax during the VE riots in May ‘45 (wisely staying indoors) and was in a naval vessel leaving the west coast when war with Japan ended in August ‘45.

Leaving so quickly that he had no time to buy civilian clothes, Doug travelled back east to enroll in the optometry program at the University of Toronto. After the completion of his degree, he started his first practice in the Crowsnest Pass. When the mines began to falter, he shifted his practice to Lethbridge. It was there that he met and married Betty, the love of his life. Unlike many men of his generation, he supported Betty in her pursuit of a meaningful work life and in her advocacy for children with disabilities, prompted by the birth of their daughter Jane, who lives with Down syndrome.

Doug continued to work long hours until his early 70s, when he retired to a life of more relaxation and travel. During that time he endured several battles with cancer and the prolonged illness and shattering loss of Betty. True to his stoic Saskatchewan character, he accepted these losses and challenges with quiet grace. He stayed very active until his early 90s, including 9 holes of golf, 3 times a week (sans cart), usually with his sister and best friend, Lois Swailes.

While Doug often gave Betty most of the credit for raising their children, he was a quiet, loving and supportive presence for Barbara (Robin), Nancy (Richard), Jane, and Russell (Tammy). He adored his grandchildren; much to their delight, Doug was always ready to chase the little ones around the house. He will be sorely missed by Erinn (Bruce), Meredith (Adrian), Nicola, Alyssa, Nathan, Evan, Mikaela (Conrad), Alex and Rachel, as well as his great-grandchildren Isabelle, Claire and Peyton.

The family would like to thank Dr. Howe Leam for his many years of skillful and compassionate care as well as the staff of West Highland Centre for helping Doug live with dignity and comfort in his last year.

There will be a private family memorial. Flowers are gratefully declined. If you wish, donations to support the “Betty Grigg Inclusive Education Award” (presented by Lethbridge Association for Community Living — 527 – 6th Street, S. Lethbridge, AB T1J2E1 or sacla.ca) or to a charity of your choice are welcomed.

One Condolence for “GRIGG Douglas”