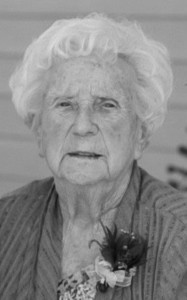 Edna Catherine Neville of Lethbridge, beloved wife of the late Fredrick Edward Neville, passed away at Legacy Lodge on Wednesday, December 30, 2015 at the age of 97 years.

Edna was born in Wombwell South Yorkshire, England. Coming to Canada in 1949 she is survived by her loving children; her son Michael (Ivy) Neville, her daughters Marie (Lawrence) Gardiner and Melody (Robert) Smythies and fondly remembered by her 10 Grandchildren and 8 Great Grandchildren.

A Private family funeral was held on Wednesday, January 6, 2016.