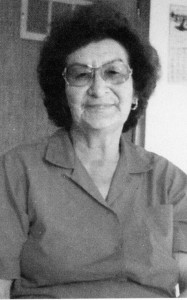 MARY SINGER was called home by our Creator on December 30, 2015. “Iikaiksistsipoyaakii” (Standing Ready Woman) was born into the Ni’taitsskaiksi (Lone Fighter) clan on November 5, 1926.

Special thanks to Dr. Clarke, Dr. Low and the staff at The Good Samaritan Society Lee Crest.