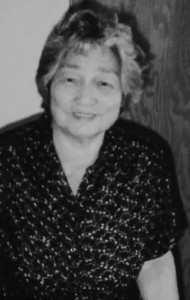 Anne was born in 1933 and went to school in Canton China. In 1950, she met Victor Quon, the love of her life, through one of his cousins. It was love at first sight and they were married soon after within a couple of months of meeting. Several years later, they started a family together. Victor had went ahead to Canada to find work. She, with her first born son John, fled to Hong Kong in 1955 when the Communist government took all their land and they then immigrated to Canada a few years later.

Anne worked in the food service industry after she came to Canada. She started out as a kitchen helper in the restaurant/coffee shop at the York Hotel. She was later hired as a cook at the House of Wong restaurant and worked there until she retired in 1983.

Upon their retirement, Anne and Victor travelled back to China several times. She had the good fortune of reconnecting with her relatives and extended family on one of these trips to China. In her spare time, she enjoyed sewing, gardening and also loved cooking and creating new dishes. She was also an active member of the Lethbridge Chinese Cultural Club until her passing.

Anne was predeceased by both her parents and 1 brother.

A Funeral Service will be held at 2:00pm, on Saturday, January 9, 2016 at MARTIN BROTHER RIVERVIEW CHAPEL. Interment is to follow in Mountain View Cemetery.

A Celebration of Life will be held at 4:00pm, on Saturday, January 9, 2016 at New Dynasty Restaurant, 103 7th Street South, Lethbridge, Alberta