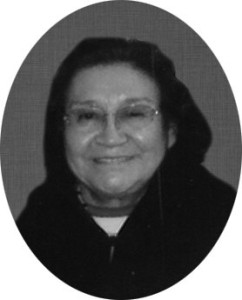 ‘Aapoyaakii’ (BYRDE EAGLE SPEAKER) passed away peacefully at Cardston Hospital surrounded by her family on Saturday, January 2, 2016. Byrde was born at the Blood Indian Hospital on December 13, 1936 to ‘Ootsiko’waohsoyi’ (Buffalo Calf Tail) ‘Misamissp’ (Long Time Old Man) Michael Eagle Speaker and ‘Maohksimmoniisi’ (Red Otter) Kathleen (nee Weasel Fat). Byrde is survived by her children: Dwayne‘Naatoisaaka’sim’ (Sacred Root) and Terrance ‘ Isstsistahtaapaomahkaan’ (Traveling about Underneath), grandchildren: Kayler and Drake and their mother Kelly-Jo Russell, her brother Ike Eagle Speaker (Gerry) and sister Evelyn Locker as well as many nieces and nephews. She was predeceased by her parents and her brothers: Wilfred (infant), Erby (infant) and Tyrone, her sisters: Beulah (Allan) Standing Alone Sr., Shirley (Pvt. Louie) Merrick and Marjorie, and nephew Louis Merrick. Byrde was raised in the traditional ways of Kainai and grew up in a very close knit family that was always together. She grew up with Tallman whom she knew as her grandfather; her grandmother Pipi had passed two years before her birth. She grew up with Aunt Louise and Uncle Bernard, was well taken care of and taught the traditional ways from Tallman and her parents. As a member of the Nitaitsskaiksi (Lone Fighter) Clan and Siksinnokaiksi (Black Elk) Clan, she grew up among Tatsikiitapi on the Blood Reserve. Her father was of the Siksinnokaiksi Clan from the north end of the Blood Reserve. Her father ‘Misamissp’ was born in 1903 and her mother ‘Maohksimmoniisi’ in 1910. Byrde excelled at whatever she undertook. Although she was not directly involved in any sacred societies of Kainai, she provided support for her brother Tyrone in the Sundance ceremonies of the Sioux Tribe which he was a part of for 8 years. Byrde had the gift of song and knew the social songs and the sacred society songs which she learned from her parents through their involvement with social and sacred societies. In May 1986, Byrde established the family drum group named “Blood Travellers” and travelled extensively with her sons throughout BC and the USA. She also sang with Old Agency, with whom she travelled to Manitoulin Island. She was also part of a documentary “Singing our Stories” and performed at The Sundance Film Festival. She also sang with Wayne Plume’s dance troop. Byrde was considered a mom and grandma to a lot of drum groups. She also danced traditional and participated throughout Canada and the USA. Byrde was encouraged by her parents to continue school and even at times when she was lonely and felt like quitting school, she would return home to her family where she felt rejuvenated from visits with family and elders. It was important to provide herself with a balance between European society and her traditional belief system. She completed her post-secondary education and received a degree in Social Work as well as a diploma in Business. In 1968 she worked for the Department of Indian Affairs (DIAND) in Edmonton and in 1971, as Executive Director of the Calgary Friendship Centre. She worked for the DIAND in Fort Smith, NWT and Fort Qu’Appelle. She was also employed with the Provincial Department of Agriculture in the Information Division, worked as a Stenographer- Book Keeper, Real Estate Agent- Secretary and at the St. Paul’s Treatment Centre. Among her greatest contributions to the community was her work with the Repatriation Program at Kainawa Children’s Services where she was instrumental in the negotiation of a Repatriation Agreement with the Blackfeet Tribe of Montana that resulted in the successful repatriation of many of our children from the USA. Upon her retirement she served as a Peacemaker with the Kainai Peacemaking Program since 2009. She was selected for this role based on her extensive experience in and lifelong commitment to child welfare matters. She also contributed her extensive knowledge of Blood/Blackfoot names and their origins, offering translations and interpretations. Byrde grew up among her elderly relatives including Tall Man, Uncle Morning Bird and his wife Niitsitaki from whom she learned the tribal history, traditional values, teachings and the Kainai way of life. Byrde will be sadly missed by her family and the many friends she made in her travels on the pow- wow trail. She will be forever remembered for her kindness and helpful ways, her extensive knowledge of Blood Tribe history, social and ceremonial songs and all her great stories. Happy trails Byrde! A Wake will be held at SENATOR GLADSTONE HALL, Blood Reserve, Alberta, on Friday, January 8, 2016 from 6:00 to 11:00 P.M. The Funeral Service will be held at SENATOR GLADSTONE HALL, on Saturday, January 9, 2016 at 11:00 A.M. with Reverend Michael Tipper officiating. Interment to follow at St. Paul’s Cemetery.