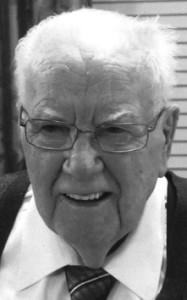 Mr. Ted (Theodore) Roset of Medicine Hat, previously from Lethbridge, passed away on Monday, January 11, 2016 at the age of 91 years.

Ted was born in Gouldtown, Saskatchewan on May 25, 1924. He married Evelyn Markwart on July 19, 1947. They lived in Moose Jaw, Saskatchewan and in 1948 moved to Gouldtown to take over the Roset family farm until 1952. They had two sons, Kenneth Dale and Donald Albert. Ted was a skillful carpenter and he built many homes in Southern Saskatchewan until he moved to Alberta to build mobile homes. In 1962, they moved to Lethbridge where Ted became plant Superintendent and Assistant Manager of HaiCo Manufacturing (Wickes Canada) where they built recreational vehicles. Ted retired in 1983. Evelyn struggled with her health and passed away on January 1, 1984. Ted moved to Medicine Hat to be near family in 2010. He was known for his deep love for God and his sense of humor.

Those wishing to pay their respects may do so at SAAMIS MEMORIAL FUNERAL CHAPEL, #1 Dunmore Road SE, on Friday from 7:00 to 9:00 p.m. Interment will take place at Mountain View Cemetery, Lethbridge, on Saturday, January 16th, 2016 at 11:00 a.m. Those wishing to attend the interment are asked to meet at the cemetery gates at 10:45 a.m. The Funeral Service will be held at RIVER VALLEY COMMUNITY CHURCH (formerly Christ The King), 1101 Queen Street SE, Medicine Hat, on Saturday, January 16th, 2016 at 3:00 p.m. with Pastor Ken Roset officiating. Memorial donations in Ted’s memory may be made to the Reliable Charitable Foundation of Hope, #12, 53016 Hwy 60, Acheson, Alberta, T7X 5A7; www.reliablecharitablefoundation.com. Condolences may be sent through www.saamis.com or to condolences@saamis.com subject heading Ted Roset. Funeral arrangements are entrusted to SAAMIS MEMORIAL FUNERAL CHAPEL AND CREMATORIUM, “The Chapel in the Park”, Medicine Hat, Alberta. Should you wish any additional information, please telephone 1-800-317-2647.