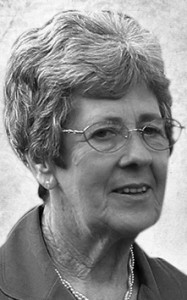 Margaret “Sut” Nicholson of Lethbridge, passed away on Tuesday, January 12, 2016 at the age of 76 years.

Born on February 28, 1939 in Gympie, Queensland, Australia; Margaret grew up in Dalby, Queensland and later attended the University of Queensland in Brisbane where she earned an undergraduate degree in Bio-Chemistry. After graduation, Margaret travelled to Canada with her best friend Majory, and met her husband-to-be, Ted in Edmonton, Alberta. The couple moved to Vancouver in 1968, where they were married and where they welcomed the arrival of their daughter Karen in 1971. During that time, Margaret worked in her field of study at the bio-chemistry lab at UBC. The Nicholsons re-located to Lethbridge, Alberta in 1972.

Margaret’s passions and pastimes include sewing, needlepoint, cross-stitching, quilting, puzzles, and cooking. She was a volunteer for the Heart & Stroke Foundation, and generously gave her time to elderly persons who needed assistance filing their tax returns.

Margaret’s skill in the kitchen, endless creativity, and razor-sharp wit will be dearly missed.

Margaret is survived by her son and daughter-in-law Cam and Jennifer Nicholson of Calgary; her grandson Kai; and her brother and sister-in-law John and Coral Sutton of Tin Can Bay, Queensland, Australia.