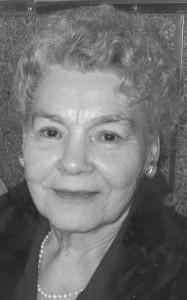 Ludmilla “Emily” Busowsky of Lethbridge, Alberta passed away peacefully on Saturday, January 23, 2016 at the age of 90 years old. Emily is survived by her children Garry (Lynette Harwood) of Melbourne, Australia and Jane (Cal) Misener of Bowen Island, BC. Emily has 3 grandchildren with 6 great- grandchildren.

Emily was born in Andreiwka, Ukraine on July 1st, 1925. At a very young age, she showed signs of determination, adventure and tenaciousness. She was curious and was keen to learn. Emily had high hopes for her life. Then in the fall of 1936 the world had turned chaotic and at a tender age, Emily found herself without a father and without a home. Like so many people, the beginning of WWII had horrific events interfering with Emily plans to be an aviation mechanic and a school teacher. After travelling for almost a year, Emily ended up in a refugee camp where she worked with orphan children. Trying to find a way out, she wrote letters to her father’s relatives and headed for Austria. In Austria, Emily met her future husband, Nick Busowsky. Immigration was a reality for many people and Emily wanted to see the world. Emily immigrated to Canada and worked as a domestic with a family with young children. Nick also immigrated with his family to Canada. Nick and Emily were married in 1949. They saved enough money to buy their own farm near Shaughnessy, AB. They raised 2 children – Garry and Jane. Emily worked hard on the farm but it was a very happy time for her. In 1970 the Busowsky family moved to Lethbridge. Emily started working – first at Canada Packers and then at IGA as a meat wrapper. She then worked as an assistant at the Lethbridge Community College helping young adults get training in a meat cutting course. A natural teacher, she helped and encouraged young people with their careers. Fluent in many languages, Emily was often asked to be a translator.

In retirement, Emily and Nick travelled to many countries. Emily was always very keen to learn about new cultures and just wanted to see the world.

Throughout her life, Emily was an active member with the Ukrainian Greek Orthodox Church – choir and with the ladies membership. Emily started a Ukrainian dance group in the church basement. She was very proud of her dancers and their performances. She had a love of gardening. Emily so loved her family, friends and cherished all the moments she had with them. Emily enjoyed being with other people and socializing. Truth, integrity and a love for life was with her until the end of her time. She always had a lovely smile.

The family would like to thank Gladium staff members, Dr. Greidanus and St. Therese Villa staff for her care during the last few years, the Ukrainian congregation for their never ending love and support, the very Reverend Father Taras from Calgary for providing the service and a thank you to all the wonderful friends and neighbors who were always willing to lend a hand.

A Funeral Mass will be held at 10:00am, on Monday, February 1, 2016, at HOLY TRINITY UKRAINIAN GREEK ORTHODOX CHURCH, 643 13 St N, Lethbridge, with the Very Reverend Father Taras Krochak officiating.