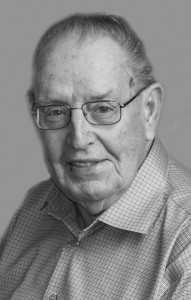 “I know in whom I have believed…”

Lambertus Fredrikus Konynenbelt (Bert F.), beloved husband of Patricia (Visser) passed away peacefully, surrounded by his family on February 2, 2016. He was 84 years of age.

Dad was affectionately known as Big Bert or “The Big.” He was born October 2, 1931, on the family farm near Nobleford, Alberta. It was here where he fulfilled his lifetime passion as a farmer, but also spent 28 years employed as a machine operator at Noble Cultivators which he commonly referred to as “The Mine.”

Bert met the love of his life, Patricia Visser, at a youth rally in 1958. They were married July 6, 1960 and were blessed with one daughter and three sons.

Dad was an active member of the Nobleford Christian Reformed Church where he was a faithful servant of Christ. He demonstrated humility, faithfulness and compassion to all who crossed his path.

“Big Bert” will be missed by the many friends and acquaintances he made throughout his life and whom he treasured deeply. He had such an outgoing personality. We have shared many laughs and memories with Dad as he told stories about his pets, his adventures, but most importantly, his faith. The family is comforted knowing that Bert is safe in the arms of Jesus.

Family and friends are invited to pay their respects between 3:00pm and 5:00pm, on Sunday, February 7, 2016 at MARTIN BROTHERS RIVERVIEW CHAPEL, 610 – 4th Street South, Lethbridge.

A Graveside Service will be held at 12:00pm on Monday, February 8, 2016 at NOBLEFORD MONARCH CEMETERY with a Memorial Service to follow at 1:00pm at NOBLEFORD CHRISTIAN REFORMED CHURCH, 522 Hwy Ave, Nobleford AB, with Pastor Jim Zondervan officiating.

In lieu of flowers, donations may be sent to a charity of your choice.