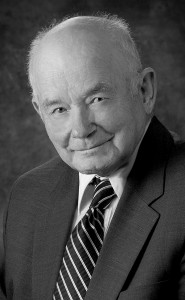 WILLIAM ELDEN LITCHFIELD passed away peacefully with his family by his side on Saturday, January 30, 2016 at the age of 96. Elden was born in Purple Springs, AB on June 4, 1919. He was predeceased by the love of his life, Marie (Walker) Litchfield in 2000. Elden leaves behind a loving family. Phyllis (Marlin) Snider of Calgary, Linda (Gordon) Gedlaman of Lethbridge, David (Cheri) Litchfield of Calgary, Reid (Tiffany) Litchfield of Henderson, Nevada, Bradley (Paula) Litchfield of Eugene, Oregon and Kandis (Craig) Parascak of Lethbridge. He was a grandfather to 26 grandchildren and 38 great grandchildren. He is survived by his sister Dorothy Francis and brother Dean Litchfield. Elden was predeceased by his parents Joseph and Ferl; brothers Reid, Linden and Melvin; sisters Melba and Iris and granddaughter Merin Melnyk. Elden joined the Canadian military in 1941 and became a Lieutenant while serving overseas until the end of the war in 1946. After returning from the war, Elden continued to farm on the family farm with his father and brothers. As well as farming, Elden fulfilled his passion and became a school teacher. He taught in many schools including Brooks, Scandia, Patricia and Taber. In 1969 Elden was proud to be named Teacher of the Year at W.R. Myers High School. Elden was an active member of The Church of Jesus Christ of Latter-day Saints and served in many church callings including serving with his wife in the Alberta Temple and two full-time missions. Elden was a loving husband, father, grandfather and great grandfather who dedicated his life to serving others. Those who knew him could not help but be grateful for his unconditional love and knowledge. He will be forever missed. Funeral services will be held at The Church of Jesus Christ of Latter-day Saints, FAIRMONT CHAPEL, 205 Fairmont Blvd South, Lethbridge, on Saturday February 6, 2016 at 1:00 p.m. with Burns Hill officiating. Friends may meet the family from Noon to 12:40 in the Relief Society room. Interment to follow at Archmount Memorial Gardens, West Lethbridge.