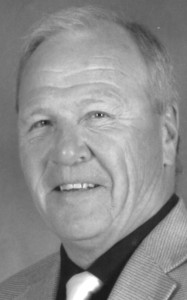 RONNY (RON) JOHN HUTCHINSON of Warner, beloved husband of Louise, father to Marni Hutchinson (Kyle Girard) of Okotoks, Celeste (David) Small of Okotoks, Shaun (Brianne) Hutchinson of Lethbridge, and grandpa to Wyatt Small, passed away at the St. Michael’s Health Centre, on February 18, 2016 at the age of 69 years.

Ron was raised on the family farm east of Warner and attended grades one to 12 at the Warner School. He had a great love of basketball, playing through high school, at Mount Royal College, with the Doug’s Sports Men’s team, and at the University of Lethbridge (U of L). Ron met Louise Kirkham at the U of L in 1968, and they were married in 1971.

Ron had a love of business that started while working for the Bank of Nova Scotia and eventually led to working for the Industrial Acceptance Corporation (IAC). He excelled with IAC, which gave him the opportunity to work in Lethbridge, Calgary, Red Deer and Dawson Creek.

Ron’s work in the business world took Ron and Louise to Dawson Creek, where they began their life and adventures together before returning to the family farm in 1975. Here they raised their three children and Ron successfully farmed for 34 years.

Ron worked tirelessly, volunteering in the community. He helped build and maintain the Warner Curling Rink, coached both boys’ and girls’ high school basketball, and sat on the Warner Senior Citizens’ Housing Committee. He had a great time planning the annual MJ memorial golf tournament for many years, which raised funds for cancer. Ron was also a lifetime member of the Warner Elks Club and served as Exalted Ruler for two terms.

In 2001, Ron and Louise moved to Lethbridge, although Ron continued to farm until his retirement in 2009. Following that, Ron and Louise pursued their love of travel, wintering in Phoenix where they met many great friends, and visiting countries in 6 of the 7 continents in the world. A personal favourite of Ron’s was the great pyramids of Egypt.

Family was very important to Ron, and he ensured his family spent many summers at his brother Jerald’s cabin in Kalispell and took the family on annual trips to Kelowna with the Kirkham clan. There were also many family adventures that helped instil a love of travel in his kids, including a trip of a lifetime to Disney World and the Bahamas, ski trips to Whitefish, and many camping trips to Elk Water and Waterton. The most recent family trip was to Costa Rica in 2009 to celebrate his retirement and the sale of the family farm.

Ron was an avid sportsman with a love of hunting, curling, pickle ball and golf. The Wrentham Curling Bonspiel was an annual highlight for nearly 30 years. Upon moving to Lethbridge in 2001, golf became his passion, with many close friendships being formed at the Country Club. Ron’s love of curling and golf also led him to volunteer with major golf and curling events such as the Scottie Tournament of Hearts and the Canadian Ladies’ and Mens’ Amateur Golf Tournaments.

Ron was generous to a fault, and a true gentleman. He had a great sense of humour, made friends wherever he went, and was always one to speak his mind. He loved people and accepted everyone without judgement. His character, as well as his love of family and friends, shone through in everything he did. He will be dearly missed by his family and many friends.

A Private Family Inurnment will be held in the Warner Cemetery.