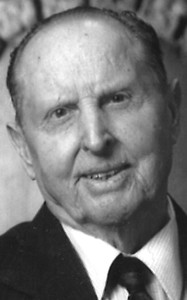 DELBERT MILTON KIEMELE, beloved husband of Laureen of Lethbridge, passed away at the St. Michael’s Health Centre on February 24, 2016 at the age of 92 years.

He is lovingly remembered by his children: Darlene (Ford) Nelson of Cardston, Don (Colleen) of Longview, Dean (Wendy) of Strathmore, Brian (Peggy) of Lethbridge and his son-in-law, Henry Lepko of Lethbridge.

Del was predeceased by his daughter Lois, parents William and Estella, brothers: Louis, Melvin and Keith and sisters Mable Vare and Beatrice Hately.

Del was born December 29,1923 in Bassano, AB to William and Estella (nee Francis) Kiemele – the fourth of eleven children. He grew up in East Majorville – east of Milo, AB. In 1941, Del moved to his grandfather’s homestead west of Cardston. He married Laureen Vance in 1949 and they ranched in the area until 1988 when they retired to Lethbridge. Del was an excellent stockman and he could usually tell the weather by looking at the mountains. He was a man of his word, honest and always willing to help a neighbor. Del and Laureen loved to dance, bowl, play cards and picnic with the family. He was an avid horseshoe player and woodworker. Del loved his wife dearly for 66 years and was a friend to all. He was a hard worker, dependable and devoted to his family.

The family extend sincere appreciation to the staff at the P.A.R.P Unit of St. Michael’s Health Centre for their outstanding care and compassion.

A Celebration of Del’s Life will be held at a later date.