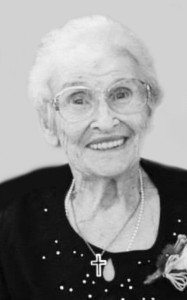 It is with deep sadness the family announce that Irma Baier passed away peacefully on March 9, 2016 at the age of 89 at the Lethbridge Cedar Creek Assisted Living.

She was predeceased by her loving husband and lifelong friend, Peter Baier, of 62 years; her parents, Johannes and Christine Vogel, her brother, Alex Vogel, sister, Erika Domogalla (all in Germany) and her aunt, Barbara Meder.

Irma was born February 18, 1927, in Kamenka, a German province in Russia. She married Peter Baier in November 1951 in Germany, they immigrated to Canada in April, 1953. The family initially resided in Turin, then retired in Lethbridge.

The family would like to thank the staff at Lethbridge Cedar Creek Assisted Living for the care and support provided for our mother.

Flowers are gratefully declined. Those who wish, memorial donations can be made to St. Michael’s Health Centre, 1400 9 Ave S, Lethbridge, AB T1J 4V5