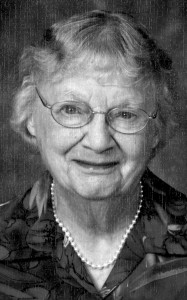 It is with the deepest regret that we announce the passing of our beloved wife, mother and grandmother, Dorothy “Sylvia” King-Brown (nee Dunn) on Saturday, March 19, 2016. She was without a doubt the wisest and most compassionate woman we have ever known.

Sylvia came into the world with quite a bang, having been born during a Zeppelin raid in Hull, Yorkshire on March 12, 1918. She enjoyed a loving childhood with her parents in Yorkshire with her best memories being from the days at Totleys, a small farm and gravel pit her mother owned. She had one younger brother, John, who predeceased her in 1985. Sylvia, as a young woman, studied French for a year in Lausanne, Switzerland. She then trained in elocution and the speech arts at the Royal Academy in London, thinking of a career in radio. Those plans were shelved with the start of the Second World War as her father insisted she return to Yorkshire.

It was the War that brought Sylvia and Dick together. They met through mutual friends while Dick was stationed with the RAMC in Halifax (near Hull). It was truly love at first sight and four weeks later they were engaged! They were married on February 2, 1944, after Dick returned from a year’s tour of duty in the Middle East and Italy. When Michael was born in April, 1945, Dick was away again with the Army in India and the Far East – like so many mothers of that time she could not be sure she would ever see him again!

Fortunately, he did return and entered Internal Medicine training in London. Robert was born in February, 1949. In 1952, they made the huge decision to immigrate to Canada as job opportunities for specialists in Britain were very limited. They settled initially in Picture Butte – a major shock to their system coming from the teeming city of London to a tiny prairie town of 1500 people! With no paved roads and a leaky trailer for a house in a very rainy August, Sylvia always said she was glad there wasn’t any money to return to England because she just might have entertained the idea! The kindness of neighbours and finding a nice house to rent made the difference, and they embraced the Canadian life and never looked back.

They moved to Lethbridge in 1954 and have lived here ever since. Elaine was born in September, 1956, and their family was complete. Sylvia was very busy during the early days of Dick’s career as she was wife, mother, and telephone answering service all at the same time! They entered gratefully into the faith community of St. Mary the Virgin Anglican Church, and she was the driving force of the Altar Guild there for many years. She was also a founding member of the Lethbridge Symphony Chorus when it began in 1965 and sang with them for many years.

Mum remembered well her literary arts training and could always be counted upon to have an appropriate quote (usually a poem) for any occasion! Years later she could still recite so many poems she had studied when she was younger. Her love of literature has been passed on to all her children and grandchildren. She was also a prodigious knitter and we especially loved the Aran sweaters she would produce for us.

Mum’s greatest gift though was that of welcoming all comers into her world. She treated everybody with the dignity, respect and kindness that all humans deserve – no matter what their standing in life. Her ability to always see the best in a person enabled her to be such a good friend and confidante for so many who came her way. She truly exemplified how to live the “Golden Rule”.

Sylvia will be greatly missed by so many but we know her spirit and love will live on in all of us who knew her. She lived her 98 years to the fullest and is now at rest.

A Funeral Service will be held at 10:00AM on Wednesday, March 23, 2016 at ST. AUGUSTINE’S ANGLICAN CHURCH, 411 – 11 Street South, Lethbridge AB., with Canon James Robinson officiating.

One Condolence for “KING-BROWN Dorothy”