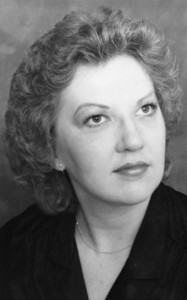 Angie was born in Lethbridge and grew up on her parent’s farm in the Eight Mile Lake district. She attended school at Sunnyside, R.I. Baker, Kate Andrews High and Henderson Business College. She worked for many years as a paralegal for lawyers in both Lethbridge and Calgary. She was an avid reader, movie enthusiast and gourmet cook. Angie will be sadly missed by her surviving brother John (Mable) Kurutz and sister Marjorie Ferguson, nieces Loretta (Lawrence) Craddock and Joanne (Brian) Baillie and nephew John Ferguson. She is predeceased by her parents Martha and John Kurutz, brother-in-law Richard Ferguson, and niece-in-law Lesley Ferguson.

A Private Family Service will be held at CORNERSTONE FUNERAL HOME at a later date.