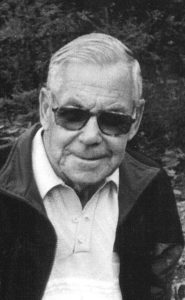 DON CALDWELL, of Lethbridge, beloved husband of Bev Caldwell, passed away at the St. Michael’s Health Centre on Tuesday, January 31, 2017 at the age of 89 years.

Don Caldwell was born on May 8, 1927 in Cardston to Howard and Mary Caldwell. Don attended school in Cardston, where it is reported that he was well known to the teachers both in the classroom and in the principal’s office. After Don finished school, he worked for Rhinehart Ranches, where he had some success in breaking horses, or at least did until his son Rick showed up one day to “help” him.

Later, Don worked as an apprentice mechanic in Picture Butte for two years, before returning to Cardston to work driving trucks for Curly Stewart Trucking. In 1957, Don started work as an apprentice mechanic for George Sloan, and when George later sold the business, Don continued to work for the new owner, Bill Leavitt, as a shop foreman for the Ford dealership where the present Ford Dealership still operates in Cardston. Following this, Don worked for the Municipal District of Cardston and was promoted to the position of Highway Superintendent, a position he held until he left to work for Alberta Environment at the St. Mary’s Dam, where he worked until his retirement in 1992.

Don met the love of his life at a dance in Spring Coulee, and on December 29, 1950, Don Caldwell and Beverly Boettcher married and became the “Don and Bev” we all know and remember today. During his life, Don was very well known for volunteering and being an active part of his community. He belonged to or was a part of many local service clubs and also served on Town Council. The Service Club that Don will be most remembered for was his long time membership in the Royal Canadian Legion, where he also served as President.

Don and Bev spent many years camping and fishing in Alberta, British Columbia and Montana, starting with a tent and eventually moving up to bigger and better motor homes, likely in order to be able to house the growing number of grandchildren that came along over the years. Don and Bev spent a lot of time in the Lake MacDonald and Kalispell area of Montana, camping at various locations, but most often always coming back to the Apgar campground at the foot of Lake MacDonald. In fact, Don and Bev spent so much time there that on Don’s eightieth birthday, the US National Park Service presented him with a plaque and card recognizing the over 50 years that they had camped in the park.

As everyone here knows, the last few years have been difficult ones for Don, but he dealt with the difficulties during these years with his usual quiet dignity. While we feel sadness and grieve his death, there is also a certain sense of relief in that we all know he has gone to a better place where there is no pain, and where he can watch over all of us, knowing once again who we all are, and waiting to greet us again around the campfire at a lake where the sun and water is always warm and calm, and where the biggest fish is always the next one he catches.

A Memorial Service will be held at the ROYAL CANADIAN LEGION, BRANCH 170, located South of Cardston on Highway 2, on Saturday, February 4, 2017 at 2:00 P.M. with Marty Leavitt officiating.