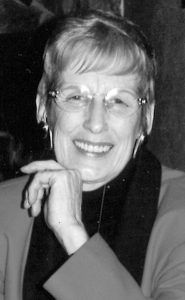 It is with great sadness that the family of a dear wife, mother, and grandmother, announce the passing of Juli Ann Calpas, on January 26, 2017, at the age of 81 years, with her last peaceful hours at the Lethbridge Regional Hospital. Juli was born July 31, 1935, to Andrew and Susannah Hagel in Lancer, Saskatchewan, and grew up on the family farm, the youngest of the five children. She was in Taber when she met and fell in love with John and they were married in 1960. They have five boys, Greg, Loren, Ron, Ken, and Bryan. The family lived in Taber, Lethbridge, and then Edmonton, the latter being where the kids did a majority of their schooling and growing up. In Edmonton Juli was extremely active both with the boys’ school and sports and yet still found time to volunteer with the St. John’s Catholic Church and the Crestwood Community League. Juli was the lead parish organizer and care person for a five member Vietnamese immigrant family. In 1985, Juli and John returned to Lethbridge and Juli became very involved with the CWL and the Assumption Church social committee. She was at John’s side throughout his career and travels and loved her husband and kids and could not have done more as a mother. Her cooking and baking was especially loved as was her time spent with relatives and friends. Juli will be remembered for her super smile and super friendly and outgoing personality. She will be deeply missed, especially by husband, John, who went beyond call looking after Juli after her accident a few years ago. Also remembering her dearly are her children Greg (Suzanne) of Calgary, Loren of Coaldale, Ron of Tilley, Ken of Lethbridge, and Bryan (Denise, passed away) of Lethbridge, and her grandchildren Madison, Alexandra, and Sydney. Juli is also survived by her sisters-in-law Dot Hagel and Tillie Hagel of Lancer, Saskatchewan and numerous nieces and nephews. Juli was predeceased by her parents, Andrew and Susannah, her brothers Tony and Simon, and her sisters Barbara and Jo and their husbands Simon and Ken. Vigil Rites (Prayers) will be held at 7:00pm on Thursday, February 2, 2017 at MARTIN BROTHERS RIVERVIEW CHAPEL, 610-4 St. S., Lethbridge led by Maureen Condon Horon. The Funeral Mass will be celebrated at 1:00pm on Friday, February 3, 2017 at OUR LADY OF THE ASSUMPTION CATHOLIC CHURCH, 2405 – 12 Ave S., Lethbridge, AB, with Father Lukas Drapal, celebrant. Interment to follow at Mountain View Cemetery. Memorial Donations may be made to a charity of one’s choice.