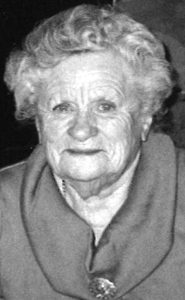 Anna Friesen was born December 9, 1922 on the family farm in the Rosthern / Waltheim area of Saskatchewan and passed away, in peace, on January 30, 2017 at the age of 94 in Lethbridge, Alberta. After a financial disaster, when she was 9 years old, Anna’s family moved. Her family travelled by horse and wagon, and walked with herded animals, to the Meadow Lake region of Saskatchewan. They kept chickens and gathered provisions, and water, and always found a way to carry on the long and arduous trip. Anna has told us stories that made that trip sound fun and adventurous, but we were reminded by her elder brothers and sisters that no, indeed, that trip was hard exhausting work, for beast and man, and sometimes it was perilous. In Meadow Lake they built and lived in a log cabin with dirt floors and a leaky sod roof. They set together the labour of making a living from the land. It was hard work and their material lives were always scant. But – family and community thrived. And that was a spirit Anna kept alive as long as she lived. On November 4, 1941 Anna married Henry (Hank) Friesen, a life-long neighbour and friend, on the family farm in Meadow Lake. Anna and Hank lived in Saskatchewan, British Columbia, and Manitoba. Around 1951, while travelling from a visit with family in Ontario, going back to Vancouver, the car broke down in Calgary. Hank had to get a job to pay for repairs, and they ended up building, with the help of Anna’s brother George, a tiny house in the little town of Bowness (it’s now a neighbourhood close to downtown Calgary). They ended up making a life there, and raised a family with four children in Calgary. Anna and Hank did a lot of travelling over their 43 years together. They travelled all around Canada and the United States, went to Mexico many times, and visited Hawaii, and Australia. After Hank retired, they were Snow Birds in Mesa, Arizona. They loved it. After Hank died in 1998, Anna did not let her grief overtake her. She made a ton of new friends, travelled, and loved her friends and family without limit. She adored especially her elder sister Mary, and one of her fondest memories is a road trip she took with Mary, Mary’s son Paul and daughter Irene. They visited the happy, by-gone places that Anna and Mary had known as children. Anna is predeceased by her parents Abram and Mary Neufeld and all her siblings George, Mary (Schmor), Helen (Stohr), Abe, and Dave. Anna’s children Janet (Raymond) Pelletier, Roger (Valerie), Holly (Harry) Brander, Cameron (Norma); grandchildren Steven Pelletier, Lyle (Tammy) Pelletier, Zoe Friesen, Colin (Susan) Brander and Daryl (Nicol) Brander; great grandchildren Nicholas Turcotte, Haley and Kenya Pelletier, Owen and Ethan Pelletier, Hayden and Paige Brander, Silas Brander and numerous nieces and nephews will all miss her dearly. She was bright and witty till the end. In lieu of flowers please give to your favorite charity. A Funeral Service will be held at 2:00pm on Saturday, February 4, 2017 at MARTIN BROTHERS RIVERVIEW CHAPEL, 610 4th St. S., Lethbridge, AB with Pastor Lloyd Cole, officiating. Interment to follow in Mountain View Cemetery.