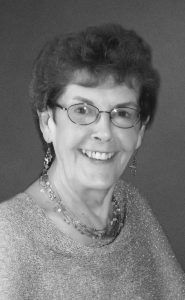 It is with heavy hearts that we announce the sudden passing of ANNE AGNES GOSTOLA (nee KEOGAN) on Monday, February 6, 2017.

She is survived by her daughters: Crystal (Mike) Hartman and Tracy Ross; and grandchildren: Dallas, Ryan, and Kendra Gostola.

She was predeceased by her beloved husband, Texas Gostola; parents, Leo and Elizabeth Keogan; mother and father-in-law, Anna and Coleman Gostola; sister Mary Kovach and other extended family members.

She is survived by her sisters: Leona (Bernie) Sheehan and Helen (Graham) Rignall of Ontario, Linda Williams of British Columbia as well as numerous nieces and nephews.

Anne was born on June 12, 1943, in Peterborough, Ontario, the second oldest of 5 daughters. After graduating, she worked as a registered nurse at St. Michael’s Hospital for several years before retiring in 2007. Anne loved serving in her church, was a past president of the Catholic Women’s League as well as being active with the Alzheimer Society, St. Michael’s Auxiliary, and the Red Hat Society. She enjoyed numerous hobbies including crocheting, photography, painting and computers.

A Memorial Mass will be celebrated at OUR LADY OF THE ASSUMPTION CATHOLIC CHURCH- 2405 12th Avenue South on Friday, February 10th, 2017 at 11:00 AM with Father Kevin Tumback, Celebrant. As Anne’s favorite color was blue, all those who attend the service are invited to wear something blue in memory of her.

In memory of Anne, Donations may be made to the All Saints Parish Building Fund – 2405 12th Avenue South, Lethbridge, AB. T1K 0P4.